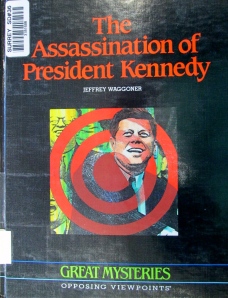 On this day in 1963, the President of the United States, John Kennedy, was assassinated. While the official verdict of the government’s “Warren Commission” came to the conclusion that a single shooter, Lee Harvey Oswald, was responsible, many have believed that the truth was something different. In the fifty years since, the JFK Assassination has become the topic that perhaps best exemplifies the culture of conspiracy theories and skepticism that the powers that be are not telling the truth.

To read more about the JFK Assassination, and other conspiracy theories, check out some of the following from your school library: