Try our the sporcle game version of our “Favourite Games” post.

November is International Games Month @ Your Library. Join with us as we celebrate the fun of board games, card games, tabletop games, party games and all kinds of live, in-person games.

Here are some of our favourites. More than a few are classics but there are also some more recent titles– maybe some that you haven’t heard of, but might like to try!

What are your favourite games? Let us know in the comments below.

Come down to your School Library to check out our selection of games, and join with us as we celebrate International Games Month.

Come down to your School Library in November to celebrate GAMES all month long. We will look at all things related to games and gaming, culminating in the return of Games Day @ Your Library. Visit us in person or online to find out more.

International Games Week is on at YOUR School Library. Here are a few of our favourite games. How many of these have you tried?

The original was introduced to the world as “The Settlers of Catan.” This game proved to be so popular it spawned many new versions and expansions, including Seafarers of Catan, Cities and Knights, and much much more. The rise of Catan was part of a resurgence in interest in board games after a decline in the video game era.

Monopoly is often the first game mentioned when people talk about board games. Monopoly was arguably the most dominant board game of the 20th Century and remains a cultural phenomenon that transcends the board game industry. While many modern game enthusiasts are rightly critical of many of the mechanics of Monopoly, the most common criticism, that the game takes far too long to play, is almost always because people don’t follow the official rules. In particular, “house rules” such as the collection of all taxes and penalties to a pot, which has been already seeded with $500, for those that land on Free Parking, serves to keep enough money in the game that it becomes incredibly difficult to bankrupt anyone, making the game go on for hours at a time. If you follow the rules and keep play moving, a good game of Monopoly should be about an hour.

Unlike most other board games, chess has no elements of chance or “luck,” unless you consider it luck if your mistakes are left unpunished by worse mistakes from your opponent! With no dice rolls, card flips or other random elements, chess is considered to be the most pure game of skill amongst all board games. Chess requires concentration, strategic thinking, time management, pattern recognition, patience, spatial awareness and many other thinking skills and qualities.

Here are some more games of note. How many have you tried?

What are some of your favourite games?

International Games Week @ Your Library is back at the LT School Library. “International Games Week is an initiative run by volunteers from around the world to reconnect communities through their libraries around the educational, recreational, and social value of all types of games.” (games.ala.org) Join us as we celebrate the power of games with thousands of people in thousands of libraries all over the world.

International Games Week @ Your Library is back.

Yes there will be adjustments for health and safety concerns. However, as best we can, with such measures as smaller groups, players more spread out, and all students and staff masked up, we are bringing back this awesome event this week in the school library.

IGW@YL is back! Sadly, our event will be smaller than in the past, as the Covid situation requires us to diligently put safety measures into place. Even so, after a long hiatus, we are just happy to be back and are looking forward to hosting Interational Games Week @ Your Library for 2021!

International Games Day @ Your Library is coming up soon!

This will be the 8th Annual IGD@YL event at Lord Tweedsmuir.
Join with thousands of people at school libraries and public libraries around the world, who are celebrating International Games Week.  Ask your teacher if your class is booked in for this amazing event. 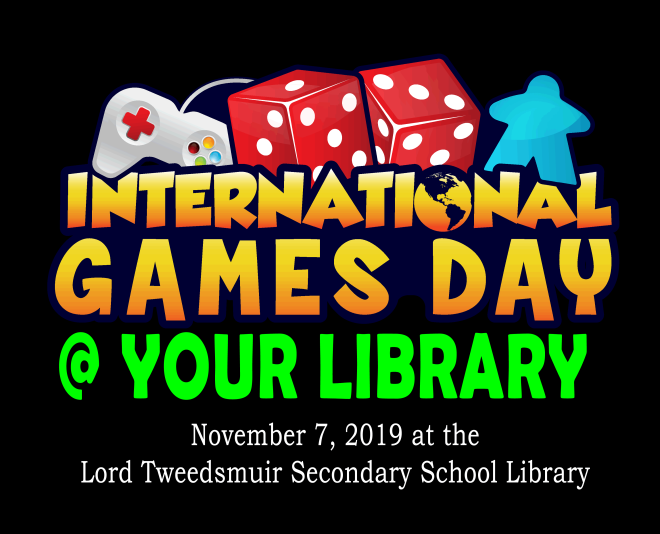